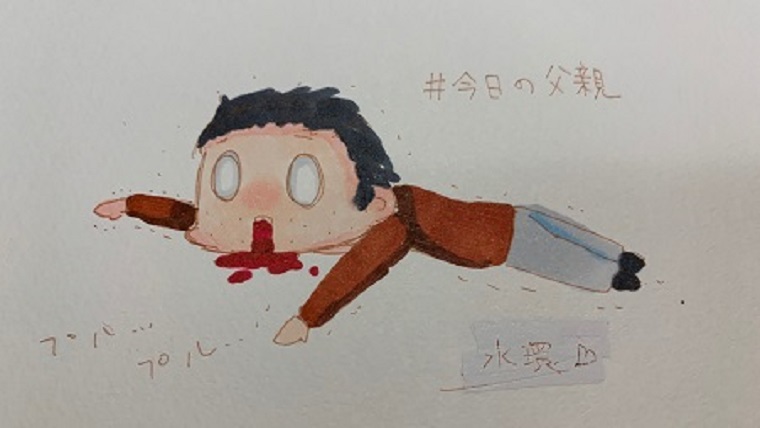 My father gave me a ballpoint pen pictured above. It is quite similar to those of Cross. To tell the truth, I doubt it really might be a Cross ballpoint pen. Anyway, I am able to use Cross’s refills for my ballpoint pen. As a heavy ballpoint pen user, I can’t endure only a day without it. So, what kinds of refills I use is very important for me. And my best choice at present is to use Mitsubishi’s Jetstream Ballpoint Pen Refill. In this review, I would like to explain why I use and how I use it.

The answer is quite simple. Mitsubishi’s Jetstream Ballpoint Pen Refill is very useful for Japanese. Low Viscosity Ink Jetstream has adopted Oil-based and Low-viscosity Ink. Its coefficient of friction is lowered by 40%, compared to ordinally Oil-based Ink. It is quite similar to S.T. Dupont Ballpoint Pen Refill called easyFLOW, whose coefficient of friction is also lowered by 40%. Both products are very good. And It is difficult to make a difference if I use them in same condition. But second reason explained below make me use Jetstream.

Many Japanese use Fine ball (0.5mm) for their business documents. But Mitsubishi provides Ultra-fine (0.28mm), Extra-fine (0.38mm), Fine (0.5mm), Medium (0.7mm) and Bold (1.0mm) ball, so I am able to use Ultra-fine (0.28mm) ball Refill for my notebooks. As you might know, Japanese uses Chinese characters. They are very complicated shaped and difficult to write. But when I use Ultra-fine Jetstream, it makes me possible to write small sized characters on my notebook, which means that I am able to put a lot of information on a small sized paper. It is amazing that we can use notebooks as tactical decision boards of War room. Ultra-fine Jetstream makes it possible. Of course, we can use it for many purposes. One example is to take someone’s likeness on a grain of rice. Practical implementation of Ultra-fine ball refill (0.28mm) might be some great contribution to humankind.

When my father gave me this ballpoint pen, he said to me “Well, my Son, you have to buy a Cross’s Refill at your own expense.” … surprisingly, three times. Many Japanese regards Cross’s ballpoint pen and its refills as very expensive. Yes, they are very expensive especially in Japan, because Cross Japan imports their goods from the United States. Imported goods tend to become expensive because of preparation for currency fluctuation. But Mitsubishi Jetstream , which is made in Japan, is not expensive for Japanese. And Ultra-fine ball refill has some features for its ball size. First, it consume less amount of ink for the same length of line. Its reason is quite simple. Ultra small sized ball make it possible to write ultra fine line. And ultra fine line means less consumption of ink. Second, it becomes expensive compared to other ball sized refills. Making Ultra-small ball, 0.28mm size, requires State-of-the-art technology. For example, I bought a 0.5mm sized refill as 80 yen (closely $1) and a 0.28mm sized refill as 200 yen (closely $2). But interestingly, lower ink consumption surpasses higher price. So totally, cost performance is somewhat good. And these features helps us use Jetstream effectively as mentioned below.

The feel of writing

The feel of writing of Ultra-fine sized ball (0.28mm) takes us to another world. When I use Extra-fine (0.38mm) ball, it makes me feel to use oiled-base ink. But when I use Ultra-fine (0.28mm) ball, it make makes me feel to use some new writing device. No more ballpoint pen. It is somewhat similar to write with Pencil and also with Fountain Pen. Some strange feelings.

How I use it

To tell the truth, “How I use it.” is a theme of this blog entry. As you might know, you should use Cross’s refill if you have enough money. Its present quality improves surprisingly compared to year 2000. (Yes, I have been a Cross user for more than 20 years.) And the quality of all compatible products I tried was not good, except only one refill. It is Mitsubishi Uni SP-7 Refill. But SP-7 Refill was originally designed for Mitsubishi Power-Molt ballpoint pen and is not sold only in Japan. At least, I can’t find SP-7 Refill at Amazon.com (U.S.A.). So, usually, you should use Cross’s original refill, not compatible refills. Only a limited kinds of people, who want to use Jetstream and don’t care product’s guarantee, should use compatible refills. And it is a long way to go when you also want to use Mitsubishi Uni Jetstream Refill for your Cross ballpoint pen. Because you have to process the clasp of your pen so that it can be used for Jetstream Refill. I also processed the clasp of my pen when I made up my mind to use Jetstream Refill instead of emptied Cross’s refill which was used by my father. As for processing, I used spire shaped file as shown below.

You may need to enlarge the hole when you use Uni Stream for your pen. And if you do, you lose your product guarantee for your pen. Of course, you have another choice. If you don’t want to process your pen, you process your refill. The metal of the top of your refill can be shaped with another shaped files. But in case of me, time is money. So I processed the clasp of my pen. It took about 30 minutes to enlarge the hole. I admit that I am not wise because I lost my precious time for such miscellaneous things. But I love the feeling to use Ultra-fine ball (0.28mm) Jetstream Refill from my own heart. You can see and check my original refill shown on top of this blog entry. It is not a cool look at all. But even the expense of coolness, I am satisfied that I am able to use Ultra-fine (0.28mm) ball Jetstream refill for my pen.

I have already consumed three Ultra-fine (0.28mm) ball Jetstream refills for a year. It was very comfortable, at least for me. So, I don’t regret to process the pen inherited from my father at all. Thank you very much for reading this my first blog entry post. Best Regards, Sei Onodani